Now like all hobbies, things evolve and you upgrade. My aspirations were to build an Elecraft K2 which were replaced with the idea of a KX3 the minute I saw it on the website.

After some serious saving of the hard earned I was at the point where I was about to hand it all over when I got cold feet. Why? Mostly because I was about to give 350 quid of it to “The Man” in the form of HMRC by way of VAT and duty. The fact that the jackals take 20% of my salary is bad enough, let alone robbing me blind just because I want to buy something from the USA!

The solution to this daylight robbery was to go for something without the overheads, so a quick spin around the ML&S website resulted in a Yaesu FT-857D along with a few extras.

The reviews rate the FT-867D very highly and you get a lot for your money in a compact unit which can very easily be made to go portable or mobile. It comes with a collection of fittings and cables to allow this which is a real bonus and a big money saver. Added to that you get a radio which covers the HF bands, 6m, 2m and 70cm straight out the box. The KX3 needs additional upconverters for your desired VHF band and you can only fit one in the case, at additional cost. The more I think about it I’ve made the wise choice.

I invested in an LDG YT-100 ATU, a MyDEL 30W PSU and a SignaLink USB to go with it. Within 3 days my patience was rewarded with a big box of toys!

I sourced a few other bits from a combination of eBay and RadioWorld.

On opening my big box, I was rewarded by smaller boxes, a huge amount of packing chips and no doubt hours of fun. 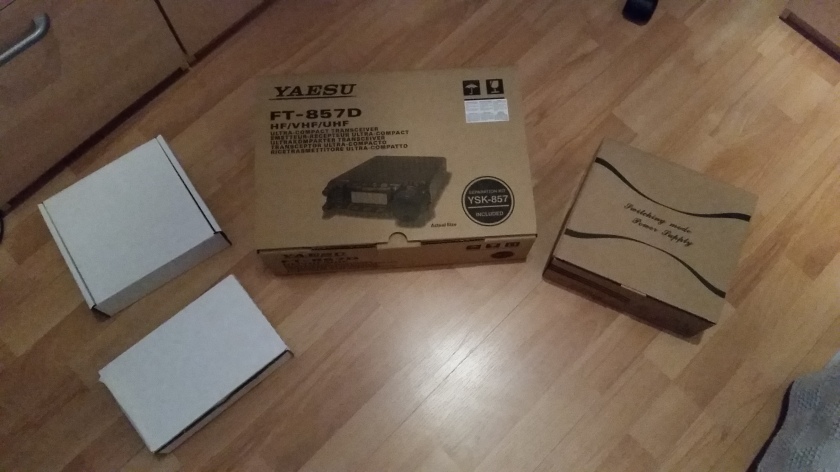 Needless to say everything came with a manual in triplicate. Ironically LDG kit has a line in the index saying “Real Ham’s don’t read manuals! (but at least read this page)”

Not wishing to reduce my purchases to expensive paper weights I went one better and read the lot. Cover to cover.

Suitably enlightened, the hardest part of setting it all up proved to be clearing sufficient shack space to accommodate things.

The FT-857D is menu driven which is covered by countless pages in the manual and I found that someone on eBay was selling a laminated A4 crib sheet for a fiver. A fiver? In the words of the Cravendale Milk advert “Jog on kitties!”

Here are the same documents, for free.

I’m sure if you wanted it laminated, 50p in the honesty box at work for the use of the laminator in your lunch break would more than cover it.

Everything was working nicely within a few hours. My first foray through the radio’s menu system means we have a nice blue display now rather than default orange!

The Signalink website usurps the manual in these days of Windows 10, which very helpfully hides away various audio levels and settings which you need to tweak. I would highly recommend a read.

So, with it all plumbed up and ready to, it was time to hit the airwaves. Here’s my results for day number one as a Yaesu owner. I’m more than happy with this given it was midday to early afternoon using new kit that I’m still tweaking.

I took the time to install a proper earth bus for the rig. I’d read a few articles where people had used lengths of 22mm copper pipe behind their desks to attach kit to. Not having the space to do this was overcome by using an earth block available from electrical wholesaler trade counters. For its size it weighs a ton but does the job well allowing easy connection and disconnection of kit should it need tinkering with, while ensuring everything is grounded.

When I was looking at the Elecraft KX3 I was going to fit the roofing filters as my main use is digimodes. After a bit of research the FT-857D can be pimped with certain additional Yaesu mods to enhance digimode and SSB use.

At first glance the Yaesu YF-122S Collins SSB Filter 2.3/4.7kHz option at 120 quid plus seem exorbitant for a 1 1/2 inch by 1/4 inch PCB. It was still exorbitant after a second glance, followed by a hard stare!

By luck someone in Italy was selling one second hand for less than a 3rd of the price for a new one on eBay, so that was one of the quickest “Buy It Now” purchases I’ve ever made!

I picked up a TCXO-9 high stability crystal oscillator to go alongside it. Again another ridiculously priced item if gauged by size!

So having owned something for a whole day I had it in pieces to fit both. Job done in just over 5 minutes. The radio motherboard is a thing of beauty and idiot proof to avoid filters, crystals etc. being fitted the wrong way around.

So there we go. All done and dusted. The filters are selected from within the menus, so can be switched in and out very easily.

So after very little hassle on the scale of things, we’re up and running. 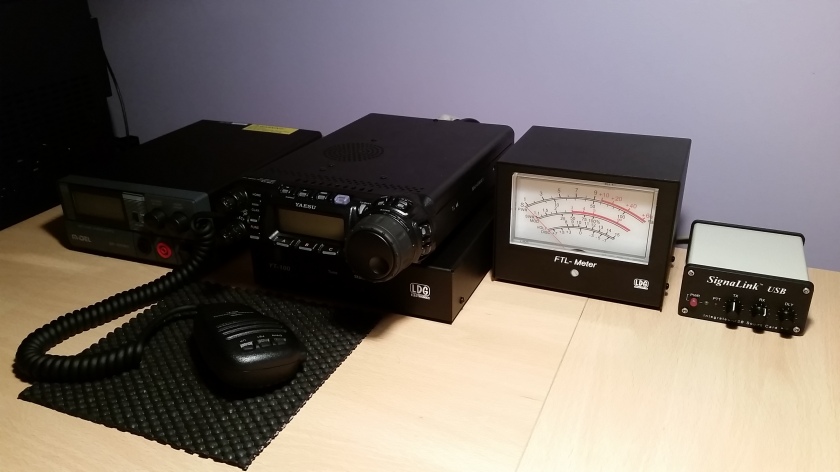 The full line up from left to right reads –

The FTL-Meter was another eBay bargain at less than half price second hand. Although the FT-857D can output all sorts of info on its LCD screen, I like having an analogue needle readily visible so that you can see what’s going on.