Well my eBay Pixie purchase eventually landed the other week. The delay in building it has been due to a slight absence of components in the kit which was annoying as my seller was the one rated by others on both eBay and YouTube. That said he no doubt just buys them in by the truck load wholesale so I’m not grinding an axe.

So armed with a few extra ceramic capacitors I decided it was time to fire up the soldering iron and see if this thing actually works. 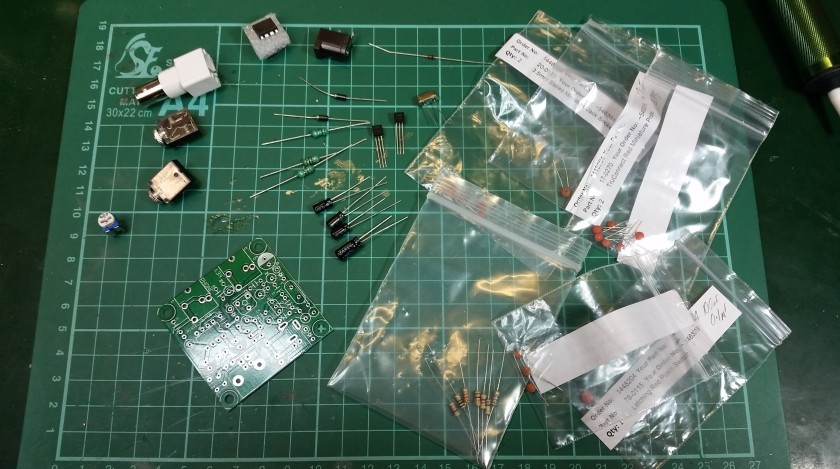 You don’t get much for your £3-92 but with a little care and attention (it’s needed as this board is tiny and the positioning of the components is pretty tight in places) you get this.

Still armed with a suitable amount of scepticism I hooked things up for the necessary smoke test. 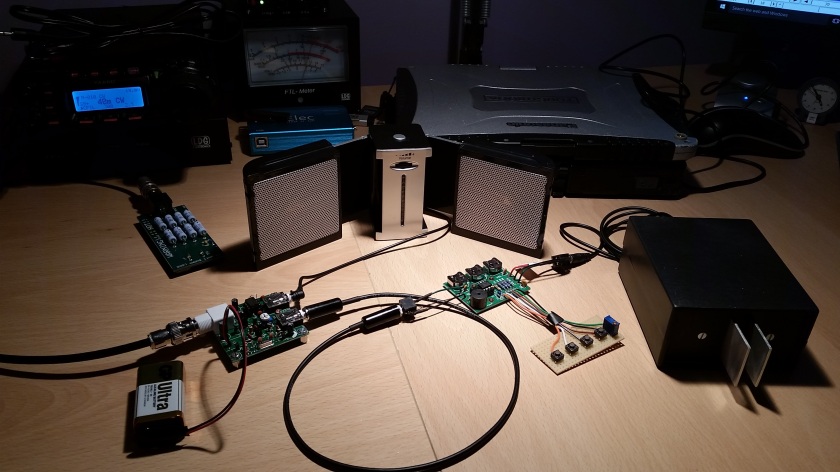 Here we’ve got everything ready to go on my desk. My capacitive touch key is plumbed into my K16 Keyer (still minus a case) which converts the ‘dit-dah-common’ wiring of the touch key to the ‘key-common’ input required by the Pixie as it’s geared for a straight key. The K16 also provides a sidetone so you can hear what you’re tapping out on the key. The Pixie is on a dummy load and my iPod speakers provide a powered audio output.

(For the non radio crowd, the dummy load is a “fake antenna” which absorbs the generated radio signal to prevent it getting out into the real world just in case you’re accidentally producing anything nasty and illegal which would cause Ofcom to come a calling. The reason the FT-857D is receiving the signal without a real antenna on the Pixie is that both radios are about 6 inches away from each other and in a similar manner to placing an analogue quartz watch next to set of head phones and being able to hear a tick, you will pick up some localised radiation.)

You note the genuine surprise here as for £3-92 I really wan’t expecting much!

I even cranked up Fldigi and stuck it in CW mode to capture the moment. 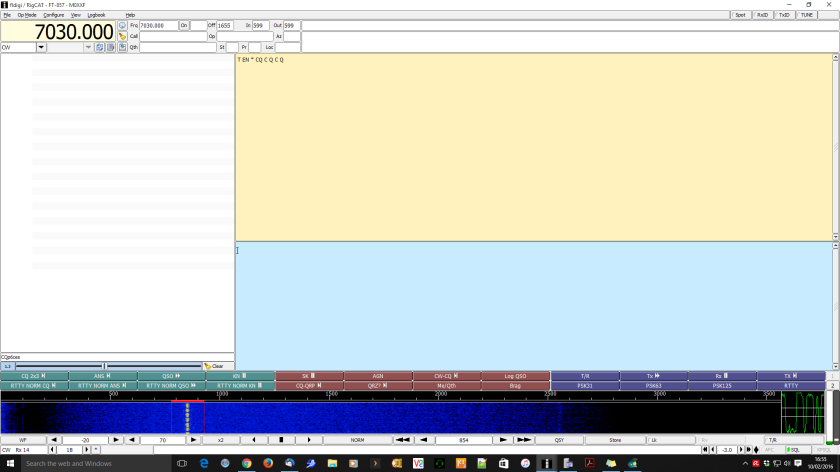 Here are my feeble attempts at a CQ call immortalised as a memento to this little transceivers inaugural outing!

The next step was to stick it on a real antenna. Unfortunately, as the waterfall in the screenshot above shows, the 40m band was very quiet at that time so there wasn’t an awful lot to hear, so I’ll give it another outing later when the band’s more active.

This Pixie is a V3 and I’m still waiting for the V4 to arrive via China Post.

I will add that I’ve pimped this Pixie by replacing the stock 7.023MHz crystal with a 7.030MHz. This will put it slap bang in the middle of the CW centre of activity in the 40m band.