The Frog Sounds Forty-9er clone is the big brother of the Pixie I built last month. 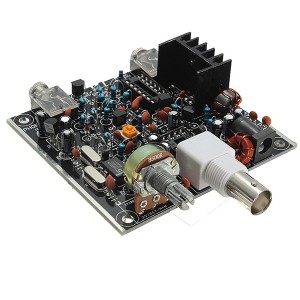 The Forty-9er originated in the Norcal QRP club, the original documentation for that creature is here and there are a lot of hardcore dead bug and Manhattan iterations out there. Unfortunately I just can’t get on with dead bug builds, my only attempt being my Intermediate Licence VFO project. 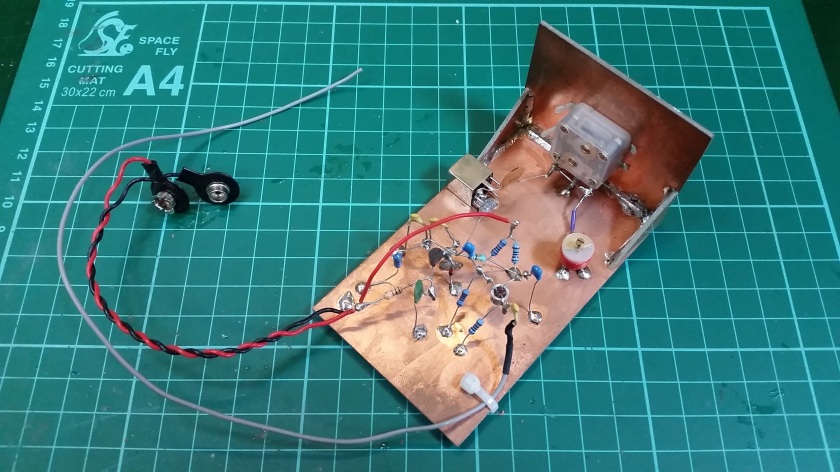 I’m not doubting it as a build technique and applaud those who can do it as it works, but I’m very much from the school of regimented PCB and breadboard construction!

Like the other Asian QRP kits there are various YouTube videos around showing how various builds have gone for those brave enough to launch in with the soldering iron. If you detect a hint of scepticism emanating, it’s not without reason. eHam didn’t rave about it only rating it a 3.3/5 on the “ham radio enthusiast’s satisfaction-ometer” and I can safely say on receiving my kit I can see why. At least I received a component list and a schematic unlike others, but on sorting the components things didn’t add up or look good.

Running a multimeter over the resistors I’m wondering which factory floor they were swept up from as the markings were dubious in several cases along with the supposed 5% tolerance. Several resistors were way off value, as in Merchant Banker LIBOR rate meddling off! At least this time all the components are in the pack, along with several spares and some completely random bonuses. The crystals are again the Asian market 7.023Mhz variety which I may substitute with the 7.030Mhz flavour which believe it or not I had to get from Greece. At least we’re supporting their failing economy!

There are several notes in Chinese on the documents which got me wondering what I was missing and a very helpful friend did the translation for me, which unfortunately revealed the square root of absolutely naff all! I was hoping that there would be a clue regarding the substitution of various components which were mentioned in my kit’s listing on eBay, which increase the Frog’s output to closer to 2W.

After seeking advice from the assembled Alumni of FPARC I was closer to knowing what I was doing and decided to start building, having dutifully sorted all my components (in the warm) into bags to make things easier. 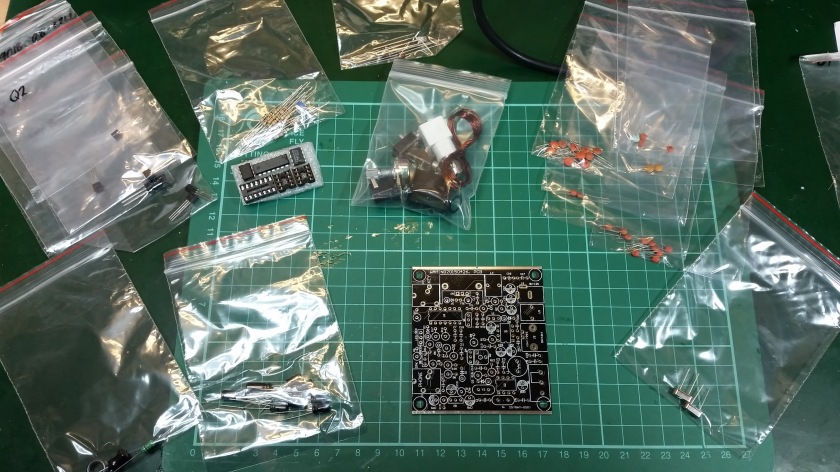 I took my time on this one mostly because it was bloody freezing and within an hour I’d lost the feeling in my fingers, toes, nose and ears. That said I managed to install all the resistors and a chunk of the ceramic capacitors soldered in place in that time. 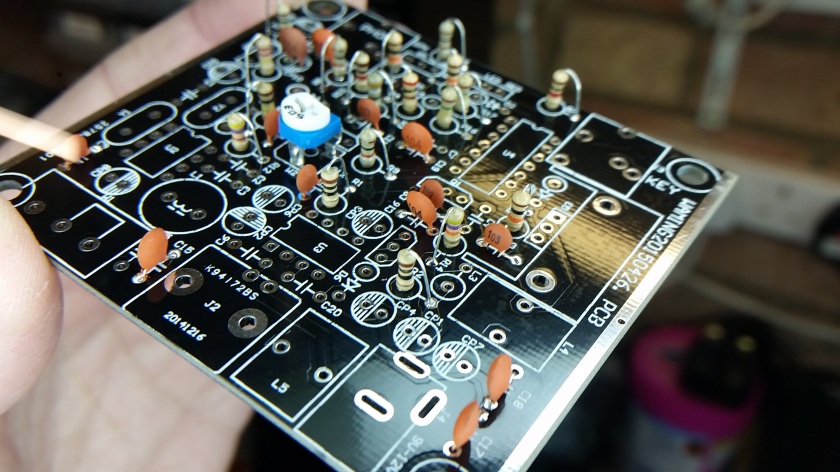 Another failing of the kit came to light during this initial stage. There were components listed on the bill of materials which just don’t exist in the circuit schematic or on the PCB and a lot of time was spent trying to work out where these elusive creatures were supposed to go, when in reality they don’t feature and aren’t required.

One failing on my part was my build technique in the face of the unknown! Normally, with a kit you attack things from the lowest level and work upwards through the height of the components so you can physically get at things. That’s all well and good with something which is a banker or so simple you can readily diagnose any construction faults, as with the Pixie. With hindsight I should have worked my way around the schematic, giving myself a fighting chance of being able to trace the various sections of the transceiver. 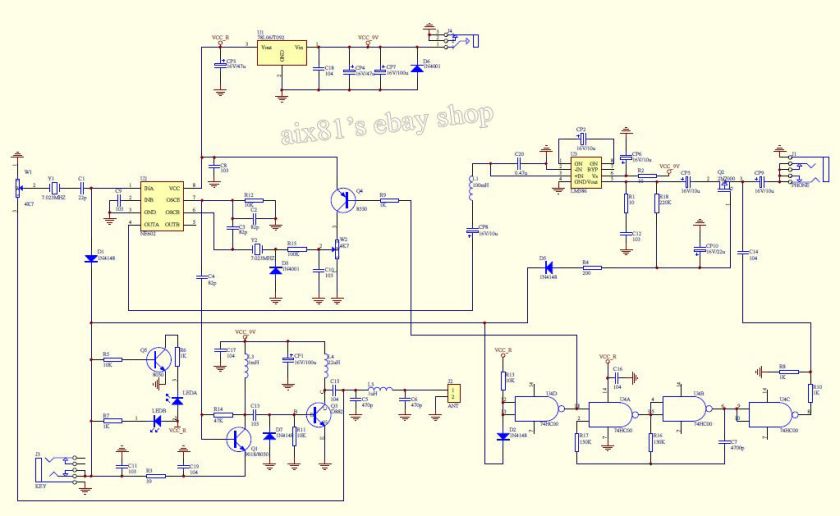 The power supply would have been a good starting point (top section of the schematic) but as usual hindsight is an exact science and I’m very much reliant on my visual checks and a degree of luck that this thing actually works. As this has taken several weeks, rather than hours to build, when I’ve had 5 minutes I’ve revisited my earlier work and double-double checked component placements. 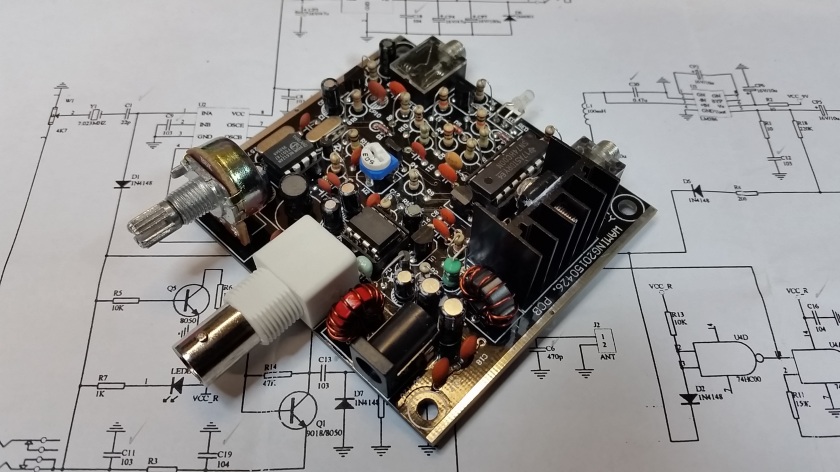 Here’s the finished build prior to the final visual check and smoke testing. It’s a compact board and wasn’t overly taxing.

Q1 has been substituted for the supplied 8050 signal transistor alternative, inductor L5 (Red T37-2 toroid between the DC power jack and the white BNC connector) has been wound with 15 turns rather than 16

I also added an application of thermal paste between the D882 Power Transistor and the heatsink to ensure maximum thermal dissipation.

Typically after finishing this kit, following the enclosed documents (as limited as they were) I found yet another bill of materials / component listing as a jpeg image on the original eBay listing.

This document makes a further modification suggestion of replacing CP9 (10uF electrolytic) with a 10 ohm resistor “if you do not like the delay when switching transceiver”.

As clear as mud! Something to look out for at the smoke test.

I eventually decided to leave the crystals alone on this one and kept with the stock 7.023MHz ones. I was going to look at installing SIP sockets on the board to make them removable but this would have meant drilling additional holes in the PCB to accommodate the mod and there wasn’t the space between the tracks. Also, with the potential for a FPARC ‘Pixie Off” I was keen to leave one of my QRP builds with crystals the same as the rest of the community, so at least I could see if it worked in the wild with similar devices available to test against.

Smoke testing needed a similar setup to the Pixie, against my FT857D. The Frog is capable of running on 9V with a claimed maximum power output of 2W and 3W if supplied with 12V.

A sensible place to start was with a 9V supply to make sure the mystical blue smoke wasn’t released as although I’m sure any of the readership hailing from France would be partial to a bit of “grenouille fumé” I didn’t want to see the fruits of several weeks delayed labour frazzle on the desk in front of me. 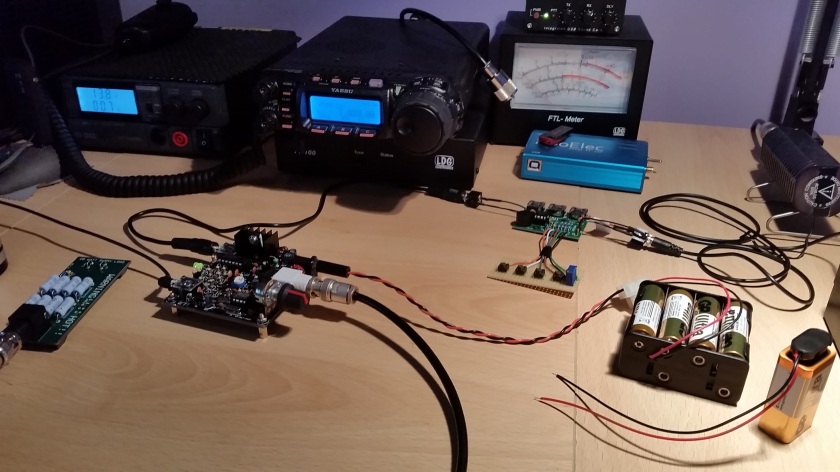 That all worked OK, so I moved up to 12V. With a supposed difference in output power as described, plumbing my MFJ- 971 into the setup would hopefully give some indication of output power and is a job for another day.

Comparing the output on Fldigi at the two voltages there is an obvious difference between the two signals. 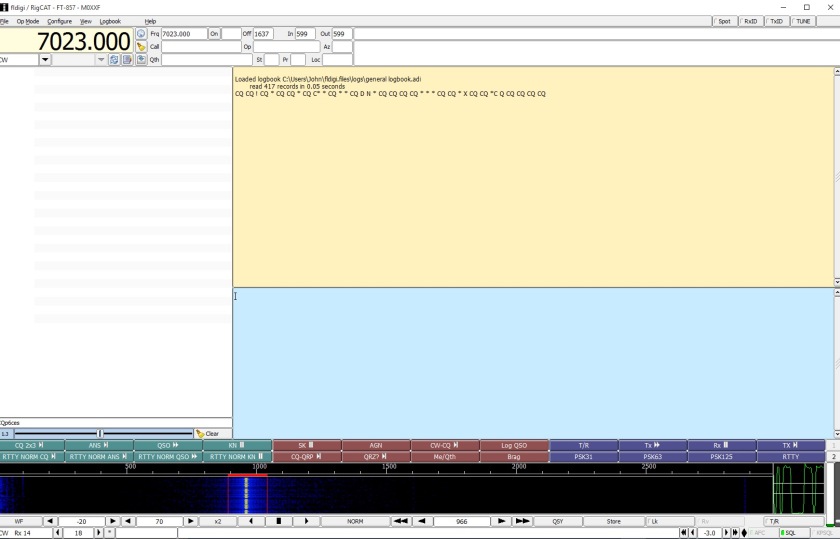 This is the output on a 12v supply. I’m not overly convinced with the purity of the signal and noticed a few harmonics when playing around. I’ve had this before with radios in close proximity when I was trying to get my SoftRock working. I’ve got a 40m filter which can be placed on the antenna output if necessary so there’s nothing too dramatic to worry about.

To be honest what do you expect for £9.49? The Frog generates its own side tone which is actually quite pleasant on the ear and the LED gives a nice indication between receive and transmit states which is a bonus.

The final stage is to put this thing in some sort of enclosure. 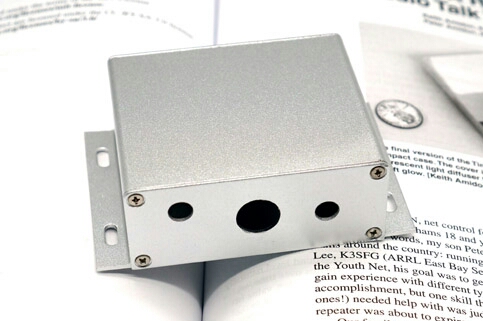 Another eBay purchase eventually landed me one of these. OK it does the job but I’m not sold on the whole winged look. There will be a certain degree of modification to this but at least the board fits nicely on the internal rails and the predrilled holes are nearly in the right place!

Here’s the Frog alongside the Pixie for comparison. 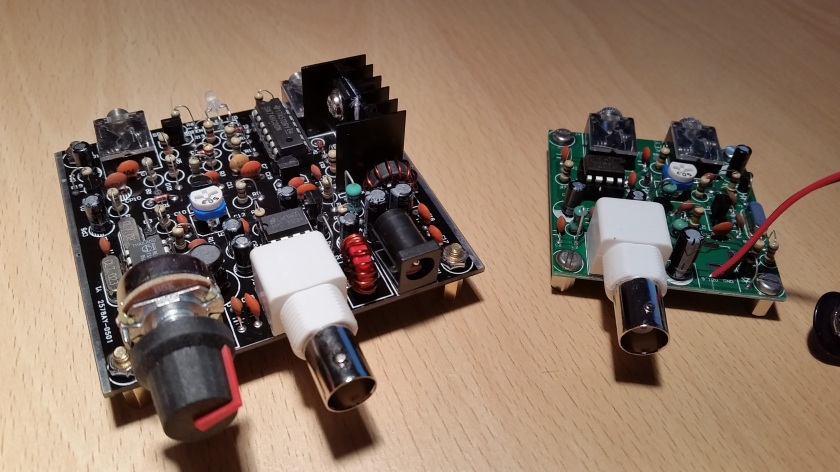 As a “next stage” in building transceivers this was fun but I’m on the hunt for another challenge now!

I managed to box the Frog today which is a bonus as I’ve got a growing pile of things needing a case starting to clutter the place. Gentle application of a hacksaw removed the “wings” and we have a slightly more fitting case. 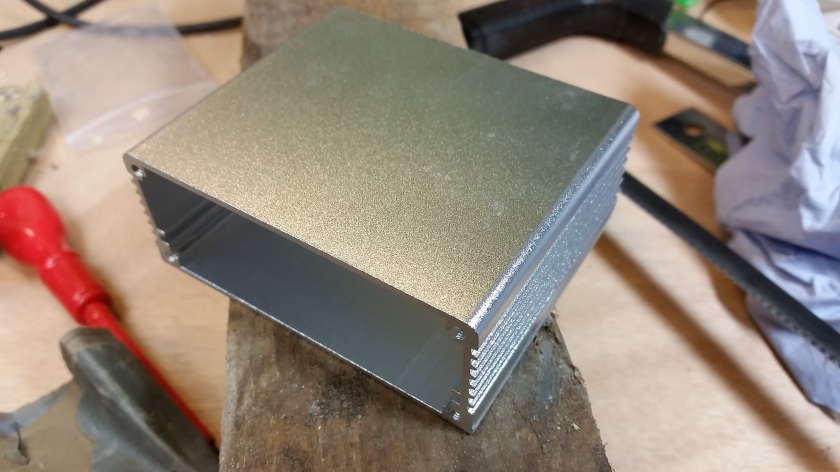 As such the finished product now looks like this 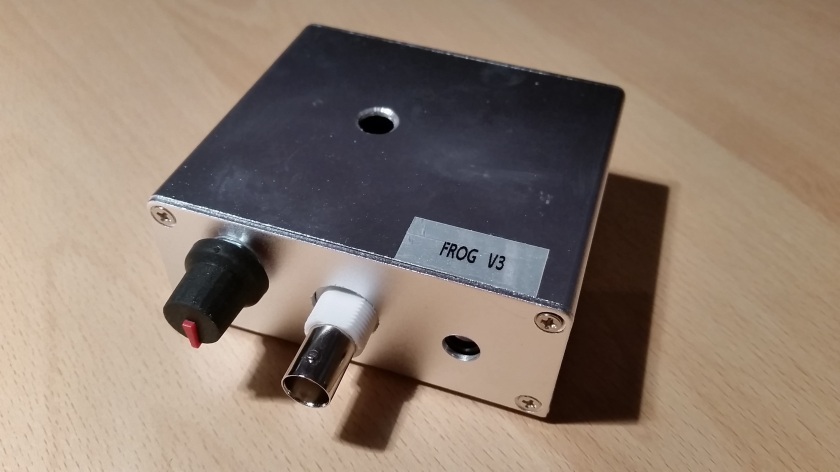 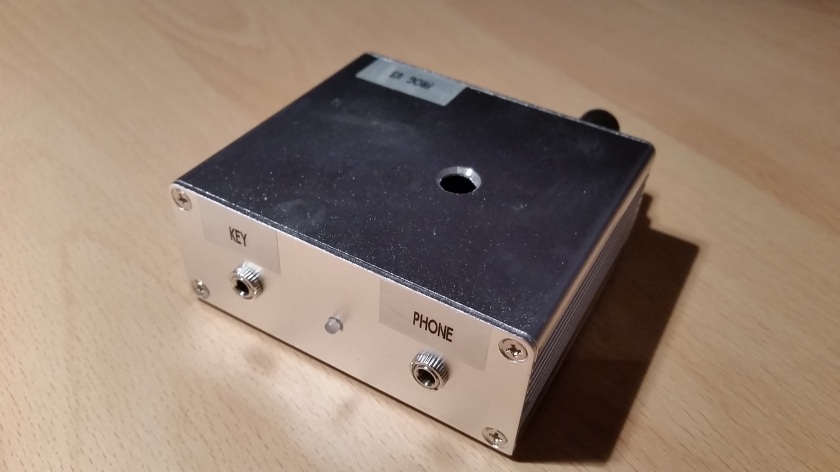 The hole in the top is for easy access to the variable resistor that allows the frequency of the oscillator to be pulled a few KHz either way.

After an email from Rasmus Svensson who is also building a Frog, it was discovered that there are plenty of kits out there which have PCB’s which bear no resemblance to the supplied schematic of bill of materials. Rasmus was having a head scratcher over an elusive resistor which he’d noticed I’d got but he hadn’t. As such, for anyone else who is Frog’ing here are copies of the schematic, BOM and overview which came with my kit.