It’s been a good twelve months since I posted anything and not surprisingly some of you have wondered if I’m still in the game or even still alive!

Thank you to those of you who have dropped me an email via the contact page asking for advice or just saying thank you for the blog posts I’ve made. It’s genuinely appreciated that my missives are of use to you in whatever shape or form.

Yup, I’m still here folks just massively busy having moved house as I’m contending with the inevitable string of “issues” that comes with new home ownership. When I say new, I’m talking a 1950’s pile which is made of materials that happily blunt your drill bits after drilling no more than 6 holes in the walls, not this modern plasterboard stuff!  Scale that up to the number of shelves in the man cave/shack along with the rest of the place and quite rapidly I’m wishing I had shares in a tungsten carbide tip drill bit making factory!

I’m tantalisingly close to being able to set my rig up again but at the minute there are still a few major house projects underway that have got to take priority and are consuming all my available time and resources.

That said I’m not resting on my laurels and there are still a few fun mini-projects underway as a distraction while I wait for concrete to dry (literally!) 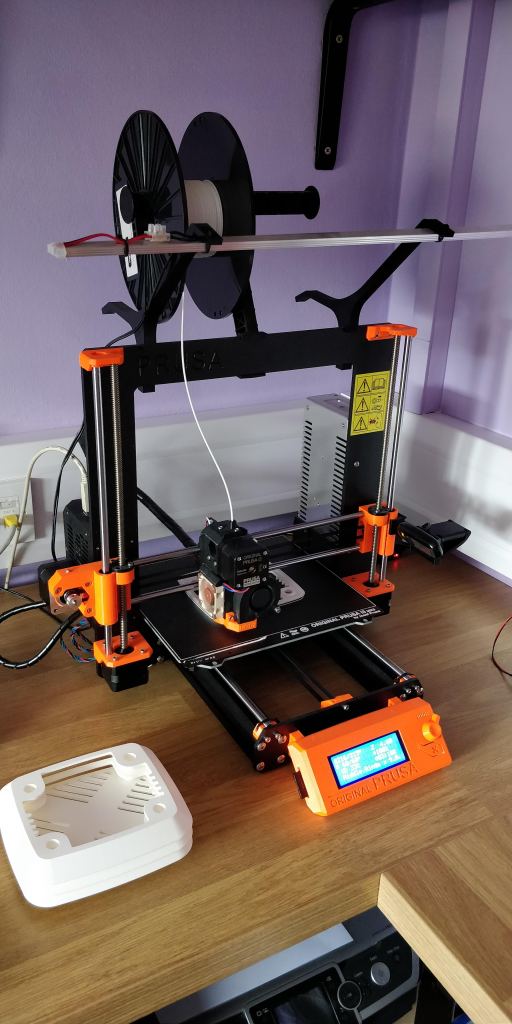 Yep the Prusa i3 Mk3 3D printer. A very useful and fun device it is too especially if you buy it in kit form (as I did) and build it yourself! Alright, I will admit to having fallen into the trap of having printed a few completely useless things just for fun 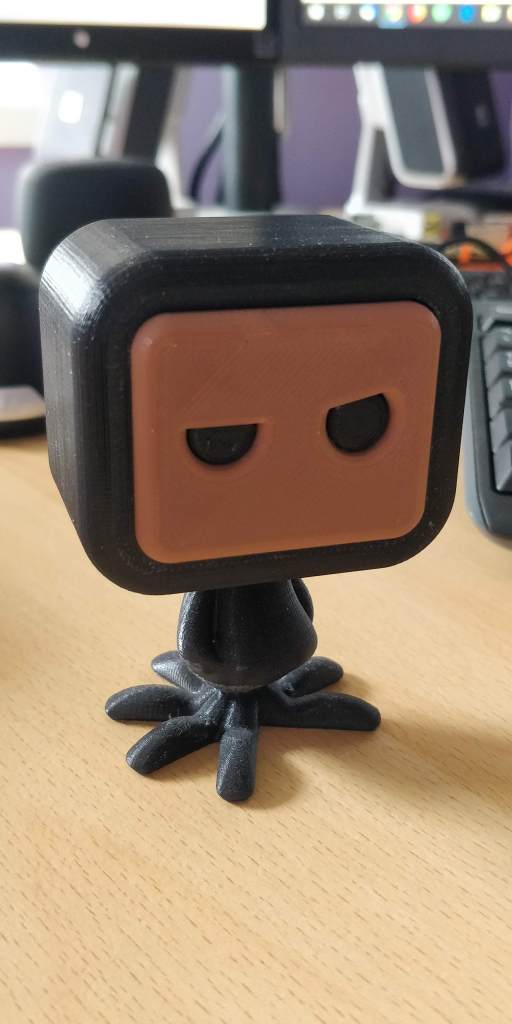 but having a bit of fun never killed anyone did it? Meet my cynical squid, his face says it all!

When it comes to slightly more productive matters it’s very useful to be able to custom print plastics as one of my biggest bugbears is finding a suitable enclosure for a project. As much as I love metalworking and being creative, to be able to produce a bespoke professionally finished item just gives things that polished feel.

This is a rack mount fixing for a Raspberry Pi so it can sit in my rack that contains my servers, router, switch etc.

The problem is in my new residence the equipment rack is in the loft. Perfect dead space to place equipment. It’s dry, clean, dust free (as I boarded the whole lot out) and secure plus the cable infrastructure to the house is easy to accommodate by dropping Cat6 cable down inside pre-existing conduits that carry other services where the house has been rewired and the central heating reworked by the previous owner.

The only snag is there’s no airflow in that loft space which has required a man in the know to come and have a look, suck his teeth and agree that there needs to be air movement in there or you open up a can of veritable baked worms! Add to that, if it’s massively hot IT equipment can start getting upset. The solution has been the installation of venting roof tiles towards the ridge line and down towards the soffits. Convection then does it’s thing, with the hot air escaping at the ridge, cooler air being drawn it at the soffit level, we have airflow and the condensation and potential damp issues are then removed.

The rub is a loft can still get hot and with the summer doing it’s thing, it’s proving the point nicely. My concern is overheating kit in the rack leading to device failure, data loss, expense and tears! The solution to this is to have the Raspberry Pi sat in the rack with a small RTC (real time clock) module sat on the GPIO header. Along with the RTC that module has a sensor on board which can accurately sense the ambient temperature. When the temperature rises to a risk level, a warning email is sent to make me aware plus the plan is that this tiny PC also sends a graceful shutdown command to the machines in the rack causing them to power down nicely. I’d rather be without them but knowing they are safe rather than frying them!

As such you can’t put the Raspberry Pi in a box otherwise you’re not sensing the correct temperature, it needs to be open to the elements, hence the 3D printed rack mount tray or skid in bright orange.

Total print time about an hour and cost in PLA is pence! OK the capital cost investment in the printer could be argued as a major negative but the uses I’ve found for it so far (including printing replacement plastic parts for my car!) have far outweighed that in my opinion. There are a few modifications and upgrades awaiting the Prusa which will be for the winter months but in the meantime I’ve got a fence to finish building while the sun is shining!